Concept Note Guiding The ABC Medical Foundation’s Decision To Host A Parallel Event At 61st UN Commission On The Status Of Women.

INTRODUCTION
Over the last two decades, there has been a steady rise in the prevalence of non-communicable diseases (NCDs) such as cardiovascular diseases, cancer, and obesity in low- and middle-income countries.  The epidemiological pattern has shifted from a predominantly traditional pattern of parasitic and infectious disease to a transitional pattern in which chronic degenerative diseases and NCDs have become more prevalent while the traditional health challenges still persist.

Due to several socio-economic and political reasons, the health sector in most African countries has not adapted to these epidemiological shifts. Most healthcare facilities in the region do not have the equipment or enough specialised manpower to confront the new trends. Many in need of healthcare have to travel to developed countries to access care, an option that is available to less than one percent of those that need care.

However, there has been a renewed global effort to reverse the situation. On September 5, 2015, member countries of the UN adopted a set of seventeen  (17) goals to be achieved over the next 15 years to end poverty, protect the planet and ensure prosperity for all as part of a new sustainable development agenda.

The third of these goals (SDG 3) is to ensure good health and well being. One of the national targets set for achieving SDG 3 is to reduce by one third, premature mortality from non-communicable diseases through prevention and treatment and promote mental health and well-being.

FOCUS ON CANCER IN AFRICA
According to the World Health Organisation (WHO), cancer is the second major cause of mortality from the non-communicable disease globally killing about 8.2 million in 2012. About seventy (70) percent of the cancer deaths occur in Africa, Asia and Central/South America.

It is also estimated that the number of annual new cases will rise from the 14 million currently observed to about 22 million over the next two decades with more than 60% of these new cases occurring in these same regions.

Thus, if African countries are to meet target 4 of SDG 3, cancer control has to be given significant attention. However, not much seems to have changed since the adoption of SDGs in 2015.

Most countries do not have structured cancer controlled programme or up to date population-based cancer registry. There is still a dearth of much needed medical equipment across the continent and a continued exodus of the insufficient expert manpower to the more developed countries in search of better working conditions and the proverbial greener pasture.

Without gainsaying, there is an urgent need for action to prevent a potential epidemic from ravaging a population that is already dealing with many socio-economic, political and health challenges.

THE PLIGHT OF THE INDIGENOUS AFRICAN WOMAN
In a largely androcentric society, the indigenous African woman is the most susceptible to the negative effects of socioeconomic and political situations.

Breast and cervical cancers are particularly significant because while the incidence and associated mortality in western countries have reduced significantly over the last 2 decades, the reverse has been the case in Africa.

The availability of population-based screening programmes, widespread information dissemination about cancers and its risk factors and effective social health programmes which enables the populace have access to good healthcare in western countries have been linked to the different cancer epidemiology trends observed in the two regions.

In the absence of these in most African countries, what or who is going to shield the indigenous African woman from the vicissitudes of cancer epidemiology?

Without doubt, there is an urgent need for stakeholders to come together to deliberate and act purposefully to effectively control and curb female cancers (particularly breast and cervical cancers which constitute over 60%) in Africa.

That is why Access to Basic medical Care (ABC) Foundation has decided to bring together prominent African women on a global stage to highlight the threat posed to indigenous African women by breast and cervical cancers and ways that this threat can be mitigated.

ABC Foundation is a Non-Governmental Organization (NGO) founded in 2013 by Her Excellency, Chief Mrs Florence Ajimobi, the wife of the governor of Oyo State, Nigeria. The foundation has the vision to ensure every individual has access to primary care and cancer prevention services. Since inception, the foundation has been at the forefront of advocacy for improved cancer control in Nigeria and Africa in general.

EVENT PARTICULARS
Every year, the UN Committee on the status of women UN CSW organizes a forum to discuss issues affecting women. Each year features a priority theme, an emerging issue/ focus area and a review theme (which reviews progress on issues raised at an earlier forum).

The 2017 forum (CSW61) is the 61st session and will take place from 13th – 24th March 2017. The session’s priority theme is Women’s Economic Empowerment in the Changing World of Work while the emerging issue/focus area is The Empowerment of Indigenous Women.

In line with the priority theme and emerging issue/focus area, ABC Foundation will be hosting a parallel event at CSW 61 to address the issue of EMPOWERING THE INDIGENOUS AFRICAN WOMAN TO CONFRONT BREAST AND CERVICAL CANCERS.

The event seeks to highlight the disease burden in Africa and proffer ways by which (First ladies and other prominent African women) can be actively involved in the empowerment of indigenous African women to combat the two diseases.

CONCLUSION
We expect the event to set in motion a chain of events that will lead to improved cancer control activities in Africa as a whole. Participants will go back to respective areas of influence and take deliberate actions to empower the indigenous women through advocacy, information dissemination and direct influencing of state policies to combat breast and cervical cancers. 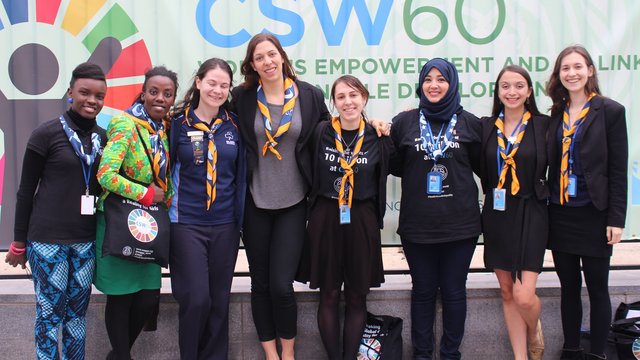 Your ticket for the: Concept Note Guiding The ABC Medical Foundation’s Decision To Host A Parallel Event At 61st UN Commission On The Status Of Women.

Concept Note Guiding The ABC Medical Foundation’s Decision To Host A Parallel Event At 61st UN Commission On The Status Of Women.