On Monday, 26th of September 2016. The ABC medical Foundation held a press conference to inform the members of the public on the series of activities organised by the Foundation to commemorate its 3rd year anniversary.

The press conference was held at the headquarters of the Foundation and was attended by a wide array of representatives from both print and broadcast media including; The Tribune, The Nation, Broadcasting Corporation Oyo State (BCOS), MITV, Radio Nigeria, Splash 105.5 FM and the Beat 97.9 FM to mention but a few.

The press conference was led by Mrs Dolapo Oyedipe, Chief Operating Officer of the Foundation who introduced the Foundation and the activities earmarked to celebrate the anniversary, other members of the delegation were Dr. Sola Oriniowo; Project and Funding Coordinator, Dr. Tobi Lawrence; Medical Officer and Miss Adetoun Adele; Admin and HR. Coordinator.

Mrs Oyedipe informed the press delegation on the theme of the anniversary’s activities ‘Cancer awareness and control’. She discussed the importance of cancer awareness and early detection and cited the ‘Kick Against Cancer’ walk to be held on Tuesday, 27th of September as part of the Foundation’s effort to increase awareness.

The other members of staff spoke on the other activities planned, which comprised of a medical symposium examining the role of HPV testing in cervical cancer control in Nigeria, free cervical cancer screening of over 200 women at Oniyanrin Primary Health Centre and the health and sensitisation activities taking place in all the Foundation’s clinics. 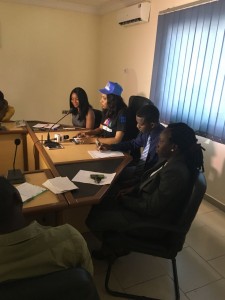 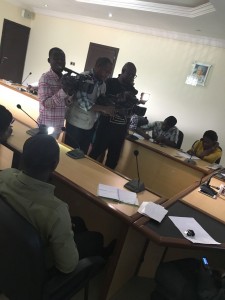